An interview with | Ariella Strings

There’s nothing quite like the atmosphere of a wedding with live music. Ariella Strings is one of the best acts I’ve come across. They nail elegance every time but like to have fun with music too. Wedding classics like Pachelbel’s Canon are of course beautiful for a church ceremony but it’s unexpected things like The Pink Panther and Bohemian Rhapsody that gets things going! You can see guests’ faces light up when they realise what’s being played!

Ariella Strings is run by by Cheryl and her hubby John. They’re full-time pros; can work as a duo, trio or quartet; and are recommended by some of the UK’s best wedding venues like Woburn Abbey, Luton Hoo, Fawsley Hall and Hedsor House. Dragons Den’s Theo Paphitis loves them too. (Visit their website to find out more about that!) They’re a talented bunch. But just as importantly they’re all about giving great service and we’ve had many conversations putting the world to rights! We may have gone a bit off track during this interview in fact! 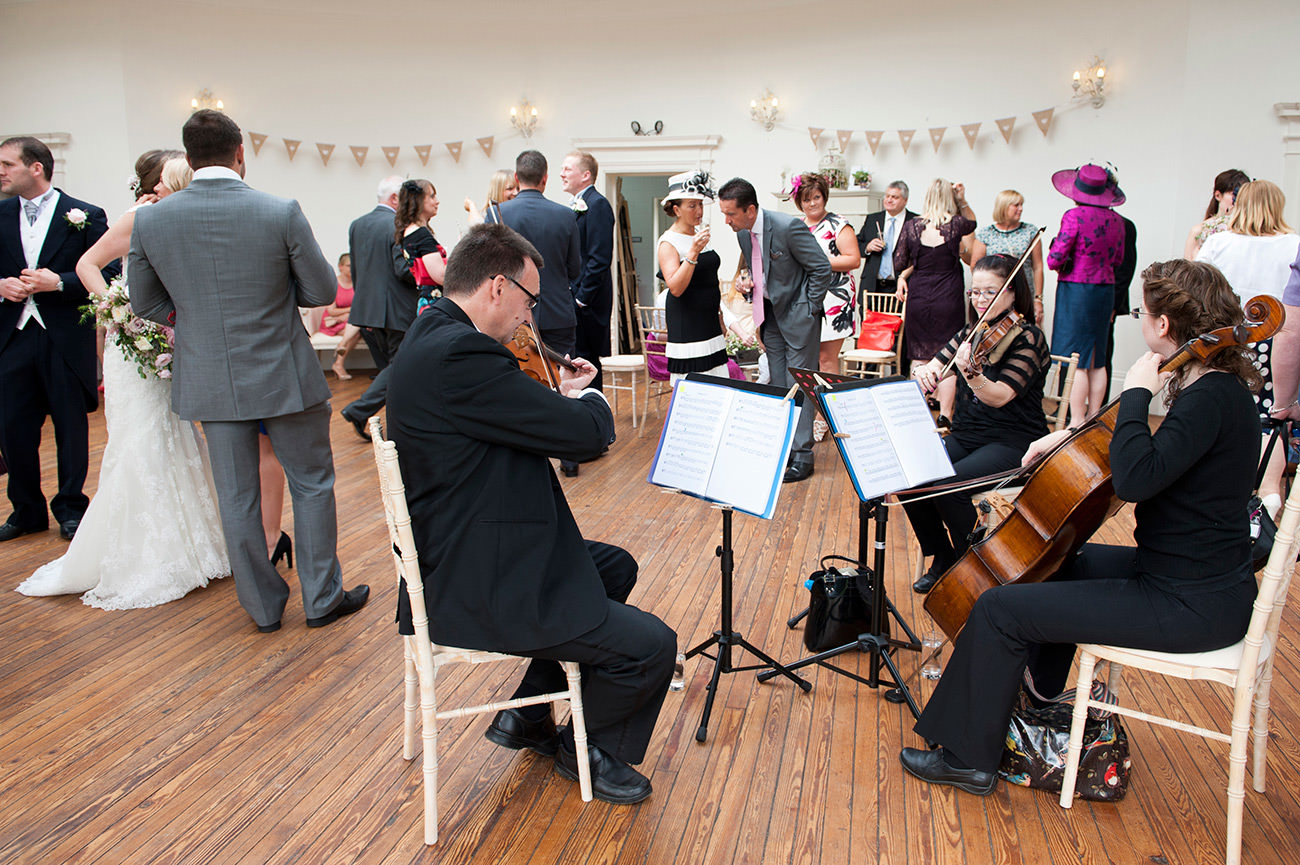 How did Ariella Strings come to be?

I’d been working with professional orchestras for years but occasionally I worked with a few different string groups as a freelance musician, playing for weddings and corporate functions. Some of the string groups I played with were not well run at all. There was a real lack of coordination, poor visual presentation, little to no attention to detail and a general lack of care. Many amateur groups and semi professionals were posing as professionals, but even some professional groups were not offering a service I felt was good enough. Musicians were simply thrown together haphazardly – some had never played together before! This kind of service was not something I would want to experience if I was a client. I felt strongly that clients deserved so much more. Hence Ariella Strings was born.

We played for all sorts of functions – weddings, funerals, anniversary parties, corporate dinners – but we felt that weddings were events where we could really make a difference. I felt that couples getting married deserved a more personal service than most string groups offer. Most string groups work purely via email/text – basically strangers turning up to what is an extremely important and intimate event in a couple’s life. Because of this we now specialise in weddings.

I also have a passion to let the world know that strings aren’t boring! A lot of people, when you mention a string quartet, picture a very staid group of musicians performing Mozart. Mozart was a genius and his music has its’ place but we aim to appeal to more than those who just love classical. We’re proud to offer a wide range of music;  like John Lennon, Bruno Mars, Frank Sinatra and Ed Sheeran. There’s something for everyone.

How does the process work once a couple book you for their wedding?

I look after all the admin, contracts, enquiries, social media and marketing. All the things that go with running a business really. So I’ll be your first point of contact.

John, my hubby, looks after all the musical bits and meets up with each couple, if they want to, about 8 weeks before their wedding. For overseas clients we use Skype or facetime.

This meeting is when John will go through our repertoire and help couples put a playlist together. Most couples have a good idea of what they’d like us to play but some need ideas and guidance, which is where John can help. He starts with finding out what pieces are special to each couple and goes from there. They chat about the style of the wedding, what kind of atmosphere they want to create and the age range of their guests. Then they put together the ceremony music and what will be played while your guests are waiting for the ceremony to begin, exploring different ideas for the entrance of the bridal party, the signing of the register and your exit as newlyweds. If we’re booked to entertain guests at the drinks reception, a playlist is put together. There’s a fair bit of form filling to make sure we get it just right for our couples.

John will also talk through our ‘JukeBox Live’ service. This is where guests can make requests on the day. It’s great for a bit of interaction and is a brilliant ice-breaker between families. Our couples love leaving their guests in our capable hands whilst they go off and have their photos taken.

Outside of the meeting, clients can phone, text or email us at any time with questions or if they want to touch base about arrangements or change any of their music choices.

What do you like best about playing at weddings?

The atmosphere. The excitement, particularly if the bridal party is getting ready at the venue. Sometimes we can hear them – hair, makeup, champagne corks popping. We love hearing the giggles and laughter as they prepare, while we set up. What a lovely atmosphere to work in – a real privilege!

What’s the hardest thing about playing at weddings?

The weather. We often have to play outside and the weather causes all sorts of problems. A lot of venues we work at don’t have any shade or shelter, so we’re completely exposed to the elements. Our instruments get damaged by direct sunlight – the varnish can melt. If it’s cooler, anything under 18 degrees really, our fingers get cold and it’s hard to play. Your guests are able to move around but we’re static and get cold very quickly. Rain isn’t good for our instruments either and we have to play inside if it’s wet or even very damp.

If it’s very windy our music stands have been known to blow over! In windy weather we use pegs to keep our music pinned in place. Much to the amusement of some guests, the pegs can randomly ping off and cause mayhem!

On hot days, if we’re playing outside, we often get attacked by all sorts of insect life, in particular the dreaded thunder bugs. They get everywhere, landing all over the music and making it hard to distinguish the bug from the note!

What’s the worst thing that’s ever happened to you at a wedding?

We had a wedding at St Catharine’s College in Cambridge. The couple were having a humanist ceremony outdoors under a huge gazebo. The gazebo was decorated beautifully with a rustic, country feel – wild flowers and berries and rustic pink ribbons everywhere. The weather started out beautifully – gorgeous sunshine!

We set ourselves up making sure we avoided the direct sunlight which was shining into the side of the gazebo. It was boiling hot. As we played for the guests waiting for the ceremony to start, the sky began to turn dark. The rain started. The venue staff delayed the Bride’s entrance and waited for the rain to ease off. Time was going on and it was clear that the rain wasn’t going to stop, so the Bride was escorted under a brolly to the gazebo. As the ceremony got underway it got darker and darker and darker. Then …. hail! Huge hailstones were lashing so hard that the celebrant couldn’t be heard and she had to stop the ceremony. The hessian floor covering in the gazebo was starting to float and before we knew it we were up to our ankles in water. The grass and trees were white. There were orders of service floating about. It was absolute devastation.

There was a ‘Plan B’ for wet weather but unfortunately the room for ‘Plan B’ was flooded as the roof had leaked! We ended up playing in a very narrow corridor, sat all in a line rather than facing into each other as a group, with guests literally bumping into us as they went past. You do what you’ve got to do – the show must go on!

What’s the most unusual thing you’ve ever played at a wedding?

The theme tune to Jaws! We were asked to play it just as a Bride was about to walk down the aisle; da dum, da dum … !

Is there a wedding you’ve played at that really sticks in your mind?

Any wedding with animals! We love those!

We had a particularly memorable experience at Woburn Sculpture Gallery where two beautiful white barn owls swept from the back of the Gallery to deliver the rings during the ceremony. It was so moving it made me cry! We were told afterwards that the real rings were safely with the Registrar, not attached to the owls! A safety precaution after one of the owls flew AWOL at a previous wedding!

What’s your favourite thing to play?

We’re constantly adding to our repertoire so the answer to this question changes all the time! At the moment I love playing ‘It’s all about you’ by McFly. It’s fun and the lyrics are so appropriate. Also Bohemian Rhapsody or Bowie’s ‘Changes’ are fantastic to play and usually get guests singing along which is great fun!

Whose wedding would you most like to play at; past or present?

Prince Harry. He’s so naughty and mischievous and makes me smile! We probably wouldn’t play Jaws or Bohemian Rhapsody though!

What do you most often do when you get home from a wedding?

Come in. Shoes off. Kettle on. Coffee. And *maybe* a biscuit or three!

If you could give a couple one piece of advice for their wedding, what would it be?

It’s got to be your choice of music. Think about what you like – what is special to you and indicative of you as a couple.  When you hear it again after the wedding, it’ll bring back the memory of the moment it was played. So don’t be swayed by anyone else. When you hear that piece of music that you walked down the aisle to, you want to think, yeah, that’s us. 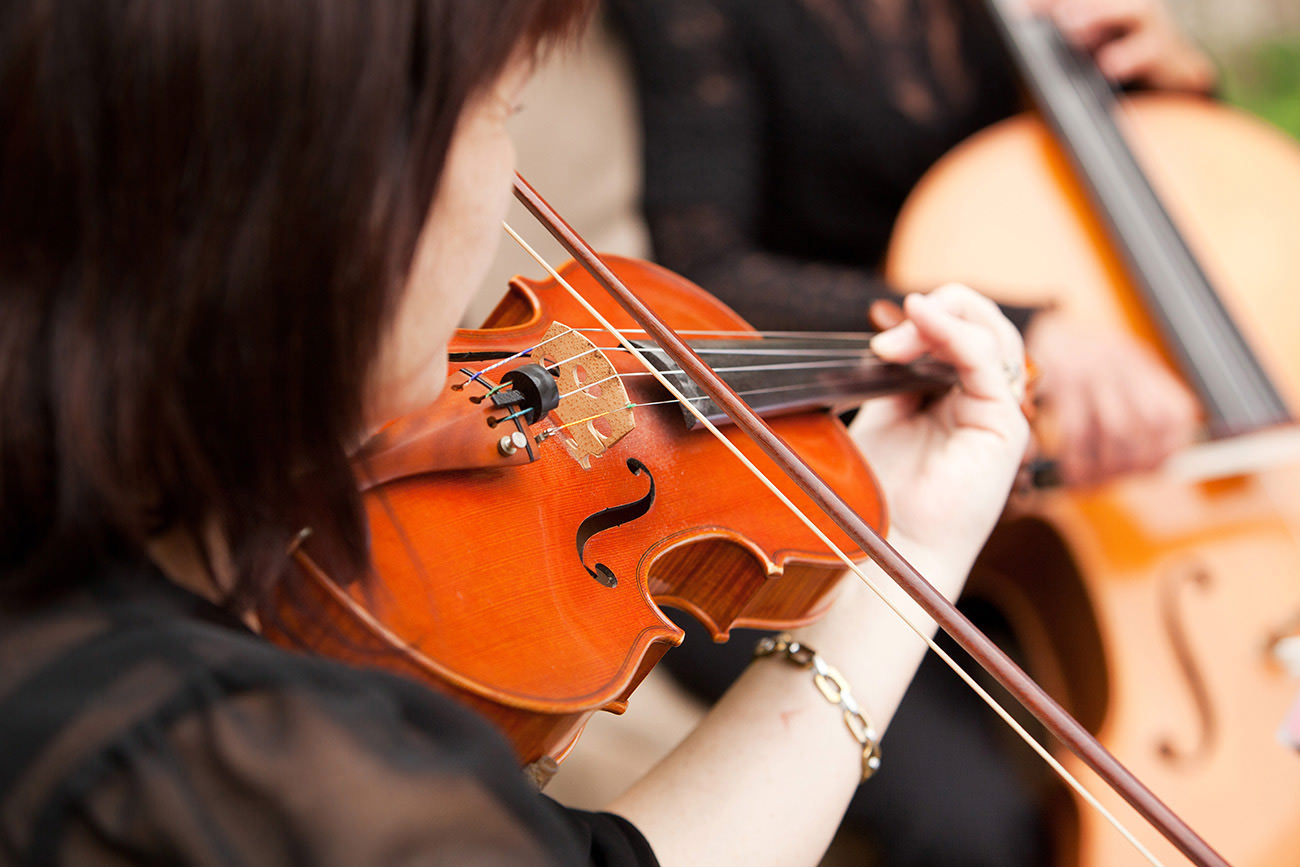